The Solar Live View Imaging Software is freeware created by amateur astronomer David Scott in order to attempt to bridge the gap between viewing directly down an eyepiece and accessing the live capture view seen on screen and finally to the finished image after stacking and post-processing.

As its name implies, Solar Live View receives data files from your capture program, processes them in real time and allows you to apply various effects such as colorization and sharpening. In addition, it can build an animation, and all this happens automatically with very little user interaction. 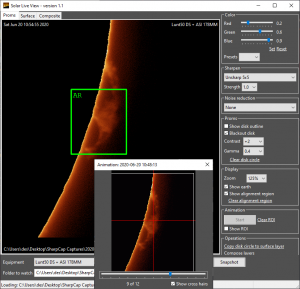 There is no installation required. Simply unzip the installation package file and drag and drop the SLV folder to a convenient place (such as your desktop). Then just run the SolarLiveView.exe program file.

– Can only handle static image files (but in many formats). Not avi files, yet.

– Does not handle data with surface detail well. The current version is focused on prominence exposures.

– The animated gifs that are created can sometimes be a bit blocky/low resolution.

David has also developed a couple of other free nifty astronomy programs including Astro Logger which he created in order to help organize astro photos. As he notes, “After about a year of doing EAA with SharpCap, I had tons of images spread across a hundred deeply nested folders and I had no idea where they were or what I had.”

Astro Logger allows you to easily store your images (as well as the all the important information about how they were captured and processed), search for them, and display them. Its search function allow you see what is visible in a certain constellation, or at a particular time of year based on what you have viewed and stored in the past.

Another program is EasySpec which he created to make analysis of astronomy spectra fun and easy, hence the name. As he notes, “There are several programs already available, but as a beginner, I found them to be either too sophisticated or simple but with a less than satisfying user interface. My goal was to automate basic functions and really streamline the process of going from a raw spectra to a possible identification. I also wanted to make it easy to document, save and share your findings. I think ES does all this nicely.”

You access Solar Live View and the other programs here.