Now in its 12th year, the Insight Investment Astronomy Photographer of the Year competition hosted by the UK’s National Maritime Museum – Royal Observatory

Greenwich, had over 5,000 entries from astrophotographers around the world. The winner was French photographer Nicolas Lefaudeux took the home top prize for his  photo (Image 1) of the Andromeda Galaxy is a creative look at the galaxy that’s closest to our own.

The tilt-shift effect makes it look as though it’s within reach when, in reality, it’s actually two million light-years away. “To most of us, our closest neighboring galaxy Andromeda can also feel so distanced and out of reach,” said competition judge Ed Robinson. “Yet to create a photograph that gives us the impression that it is just within our physical reach is truly magical, and somewhat appropriate as we adjust after such socially distanced times.” The image was taken with a Sky-Watcher Black Diamond 100 mm apochromatic refractor telescope at f/9, iOptron iEQ30 mount, Sony ILCE-7S camera (modified), ISO 2000, 2 hours 30 minutes total exposure. 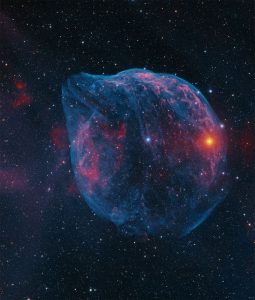 Among the runners up which were especially breathtaking was “The Dolphin Jumping out of an Ocean of Gas” by the Connor Matherne from the US. This target (Image 2) is officially known as Sh2-308, but the photographer has always enjoyed calling it the Dolphin Nebula. It is a bubble of gas being shed by the bright blue star in the center of the image as it enters its pre-supernova phase. The red star to the right could possibly be influencing the shape too and might be responsible for the bill of the dolphin. While it won’t explode in our lifetimes, seeing the warning signs are quite neat. It never hurts to say that the warning signs are the most beautiful part of this particular target. The image was taken with a Takahashi TOA-150B telescope at f/7.3, Astro-Physics 1600 mount, FLI ML16200 camera, RGB-Ha-OIII composite, 33 hours total exposure.