The Cosmic Watch app for iOS and Android are two apps in one: a world clock and an astronomical clock. The celestial watch is based on a beautifully designed three-dimensional model of the solar system as experienced from earth. It shows time as what it really is – our position and motion in the cosmos. Learn more about astronomy and our solar system, watch the real-time movement of the Sun, Moon and stars, or simply enjoy the beautiful design of the celestial sphere. 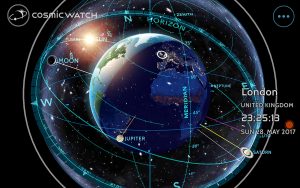 (1) Real time world clock: Know the local time anywhere around the world with just one touch. (2) Digital clock interface: Customize the Cosmic Watch app the way you like it. (3) Solar movement: Discover when sunrise or sunset will take place on any point in the world.

(1) Celestial Navigation: Align the Cosmic Watch app with the cardinal points and experience your real-time position in our solar system. Watch the movement of the Sun, the Moon and the planets in the sky. (2) Time travel: 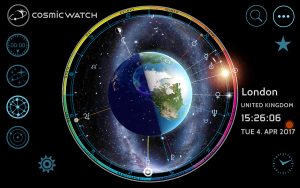 Explore any celestial positions in the past, present and future. (3) Orientation: You can adjust your telescope using the equatorial coordinates. (4) Digital Discovery Discover the solar system from a geocentric point of view. (5) Solar eclipse detector: Be aware when and where the next eclipse will occur. (6) And much more, including an armillary sphere and an Antikythera mechanism model.

The Cosmic Watch is an excellent learning tool for kids. Its exquisite Swiss-designed interface provides a uniquely effective graphical demonstration of celestial mechanics. The app is in English, but its intuitive design makes it comprehensible for anyone.

The Cosmic Watch app is not just a clock – it is an astronomical instrument which visualizes the cycles of Earth and the solar system, helping to understand how we’ve measured and experienced time for thousands of years. The Earth is the central focal point of the Cosmic Watch.

It can be used to demonstrate the apparent movement of the sky and celestial objects around us. It also shows beautifully the concept of the celestial sphere and celestial coordinates used in navigation and to locate objects in the sky.

The Cosmic Watch starts in the clock mode shown here. With the button on the top right you can show and hide the GUI. Swipe the screen in a direction to rotate the globe. Pinch the screen to zoom in or zoom out. Tap anywhere on the globe to show the time in the nearest city. This is also a nice way to discover new cities around the world. In the dark side of the Earth, you can identify many cities by of their unique nighttime lights. Zoom in and explore the World!

Tap the magnifying glass and type the name of the location in which you are interested. If you can’t find it, try the nearest large city. To save the location, click on the Plus button that appears over it. You can save up to three locations and switch between them by tapping the blue star symbol.

The Cosmic Watch appfeatures three primary modes: (1) World Clock, for timekeeping; (2) Astronomy, showing the constellations and planets, and (3) Astrology. Because in ancient times these three disciplines were considered united, the designers of the app thought it would be interesting to demonstrate their relationships.

The World Clock mode is the default setting. The clock face of the Cosmic Watch is set on the Ecliptic. The Sun, Moon and planets are displayed along this virtual line. The time dial points from the selected of the day is left. The ecliptic clock face shows the approximate time around the world.

Time control is a core feature of the application and is key to understanding the apparent motion of the sky. Fast forwarding through the celestialcycles is an enlightening experience. 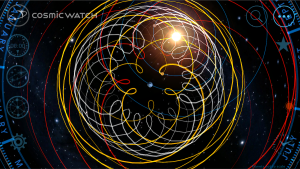 While fast forwarding time, theplanets will leave a trace of their apparent movement as observed from Earth, making it very easy to understand such phenomena as retrograde motion. When combined with the solar-system view, users are treated to a clear visual understanding of why such phenomena occur.

The app’s numerous guides include horizon, compass, and equatorial coordinates, the latter of which is among the most effective graphical depictions of the RA/Dec coordinate system we’ve experienced).

The Cosmic Watch application is priced at $4.49US on the Google Play store and $4.99US via iTunes. For more information, click here.