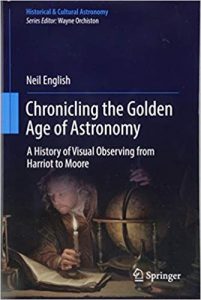 The invention of the telescope at the dawn of the 17th century has revolutionized humanity’s understanding of the universe and our place within it. Chronicling the Golden Age of Astronomy: A History of Visual Observing from Harriot to Moore by Dr. Neil English traces the development of the telescope over four centuries, as well as the many personalities who used it to uncover brand-new revelations about the Sun, Moon, planets, stars and distant galaxies.

Dr. English is an internationally respected author of several books on amateur astronomy and space science, including Choosing and Using a Refracting Telescope, Space Telescopes: A History, Classic Telescopes and Choosing and Using a Dobsonian Telescope. He is a long-time regular contributor to “Astronomy Now” magazine and has a particular interest in the history of visual telescopic astronomy. The proud owner of a 5-inch f/12 classical achromat, he also enjoys using a variety of Newtonian reflectors from his home in rural, central Scotland.

The book starts with early observers such as Thomas Harriot, Galileo, Johannes Hevelius, Giovanni Domenico Cassini, Robert Hooke and Christian Huygens, the book explores how these early observers arrived at essentially correct ideas concerning the objects they studied. Moving into the 18th and 19th centuries, the author describes the increasing sophistication of telescopes both large and small, and the celebrated figures who used them so productively, including the Herschels, Charles Messier, William Lassell and the Earls of Rosse.

Many great discoveries were also made with smaller instruments when placed in the capable hands of the Struve dynasty, F.W. Bessel, Angelo Secchi and S.W Burnham, to name but a few. Nor were all great observers of professional ilk. The book explores the contributions made by the ‘clerical astronomers,’ William Rutter Dawes, Thomas William Webb, T.E.R Philips and T.H.E.C Espin, as well as the lonely vigils of E.E. Barnard, William F. Denning and Charles Grover.

Generously illustrated throughout, this treasure trove of astronomical history shows how each observer’s work led to seminal developments in science, and providing key insights into how we go about exploring the heavens today.

For a glimpse inside the book there is a nice review by Otto Piechowski can be found on the on Cloudy Nights website. The book is available from Amazon and other online retailers.