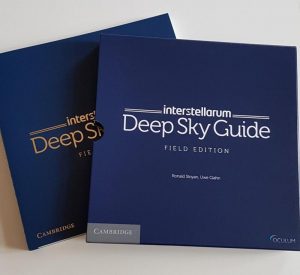 The interstellarum Deep Sky Altas has been appreciated for its contribution to modern celestial cartography and its ability to help amateur astronomers understand their night skies as it pertains specifically to their observing conditions and equipment.

The Atlas focuses on offering bright objects that are bold, and faint objects light. You can see at one glance which object will be within reach with your telescope, and which will not. The delineation is not based simply on object brightness – it’s the actual visual perceptibility that is shown. This quantity is influenced by the object’s total brightness, surface brightness, telescope size, and limiting magnitude. The deep sky object database for the atlas was prepared with Eye & Telescope, a powerful software capable of this calculation.

The interstellarum Deep Sky Altas takes an intuitive visual approach. For each spread of the Atlas, the Guide focuses on carefully selected objects, either as colored composite POSS plates or through the authors’ own eyepiece sketches. They allow users to estimate the visibility of features in the telescope while planning observations. Stars and other objects in the vicinity are highlighted, so they also serve as finder charts at night. An index map on each spread allows users to quickly find each object’s location in the Atlas.

The interstellarum Deep Sky Atlas takes all the hassle out of preparing for observing sessions – there’s no need to print star charts or photos. Simply grab your Atlas and your Guide, and go observe!

The contents of both issues offer:

– For the POSS plates, objects’ red features are visible in white light, but become invisible under red light conditions, as perceived through the eyepiece

– Can also be used to complement other atlases and online resources

The authors of the Atlas are:

Ronald Stoyan is Senior Editor of Abenteuer Astronomie magazine, and the proprietor of the independent German publisher Oculum-Verlag, which specializes in amateur astronomy books. He has authored or co-authored twelve books on practical astronomy, including Atlas of the Messier Objects (Cambridge, 2008), The Cambridge Photographic Star Atlas (Cambridge, 2017), and the Atlas of Great Comets (Cambridge, 2015).

Uwe Glahn has been an active deep sky observer for more than 25 years. With homemade telescopes of different sizes, he documents his results through classic sketches, which are published regularly in national and international magazines and books. His website records all of his results.