I demonstrate astro tech wherever people are gathered outdoors and when it comes to leveraging solar astronomy for outreach, no astro tech delivers enhanced hands-on solar-viewing experiences more naturally than Lunt Solar System’s SUNoculers. I’ve handed them to kids as young as age six and to seniors in their 90s, and none had trouble, once shown, adjusting interpupillary distance or achieving focus, much less finding the Sun with the binos.

I requested the 8×32 version, and the sample I received was Lunt’s “red” option, although the actual color of its tough rubberized armor looks more coral to me than red. Truth is, though, I prefer coral to red, not that the color of their armoring has anything to do with how they perform.

Speaking of armor, these things are rugged. They arrived in perfect collimation, and they remain in perfect collimation, despite having been transported thousands of miles over cracked pavement – and often over no pavement – in the cargo bags of a too-heavy bicycle with no more suspension than the bit of give its tires provide when inflated to 65 pounds per square inch. The pounding ride of the Surly Big (that’s what I call her) has destroyed more than one item of high-end astro tech since we hit the road in May, but the Lunt 8×32 SUNoculars still look and perform like new.

Their center hinge is firm enough to hold interpupillary distance wherever the user sets it, but smooth enough that resetting it is natural and intuitive. Ditto the action of the center focus knob – smooth, predictable and stable. Despite their affordability, Lunt’s 8×32 SUNoculars feel solid and exude mechanical quality.

The center hinge incorporates a threaded insert for accepting a standard 1/4-20 binocular mount bracket. It’s covered with an included screw-on cap when not in use. The eyecups extend out with a counterclockwise twist, and even this action is smooth and predictable, extending the cups in three click-stop stages that help ensure both are adjusted to the same distance.

I view sans eyeglasses and prefer the cups fully extended to better shield direct and indirect sunlight when viewing Sol. Those of you who view while wearing eyeglasses will likely need to observe with the eyecups fully retracted to get full benefit of that 13.6-mm of eye relief. When fully retracted, the leading edge of the cups are within a couple of millimeters of the outer elements of the eyepieces. 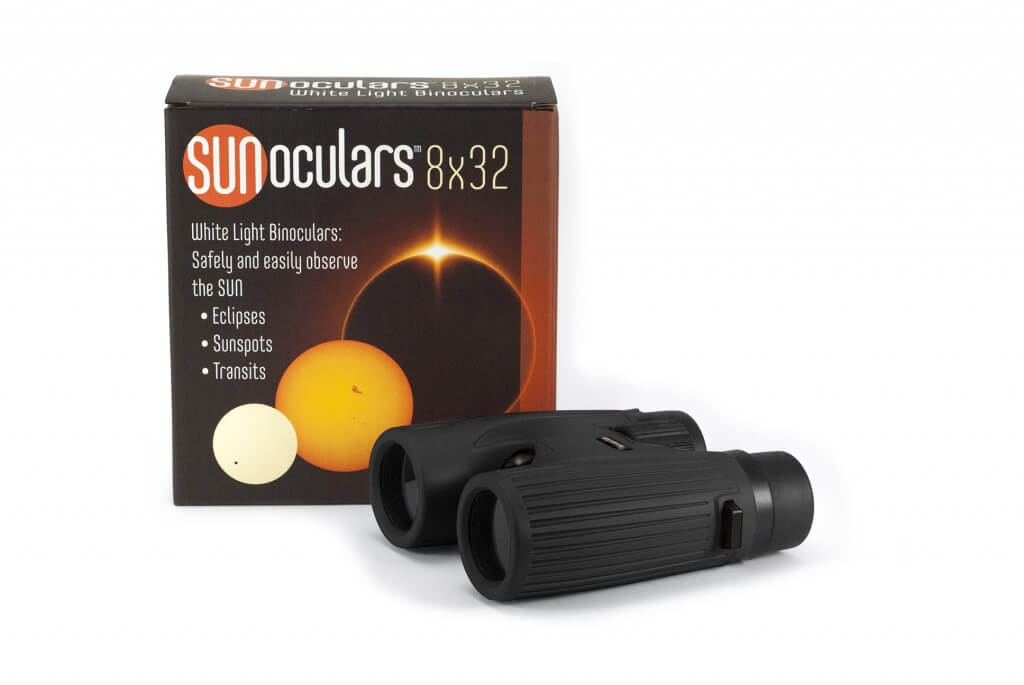 The 8×32 SUNoculars ship with a soft nylon case, a neck strap and front and rear caps. About those caps: I was recently treated by an avid birder to some oh-so-sweet Swarovskis, and although their optics were truly exquisite, their hinged eyepiece caps refused to stay on. Not so with the SUNoculars. The rear caps are joined, as were the Swarovskis, but they fit superbly and remain firmly in place, as do the front flip-down caps. They are perfectly executed and have proven durable enough to withstand the thousands of hands that have already pulled them on and off.

And about that 8x magnification: I learned long ago that, while I am capable of viewing with 7x binos handheld without distracting image shake, not so at 10x. Therefore, the binoculars I use most often for scanning the Milky Way are 7x50s, not 10x50s. Lunt’s 8×32 SUNoculars have taught me that my hands are steady enough for pleasing handheld views at 8x, too. Of course, it helps that the SUNoculars are much lighter at 18 ounces than my favorite 7x50s.

Okay, they’re refined and durable, but what about the views? Well, given that I’ve used nothing comparable against which to evaluate them, I can only describe what I’ve seen through the SUNoculars, and what others have reported seeing. I’ve seen Sun spots in unexpected detail, given that I was viewing them at just 8x by hand. I’ve even seen a hint of surface granularity, which I also did not expect at 8x. Perhaps it was my mind’s eye supplying those details from memory, but I doubt it. I’m not that imaginative.

I expected a bright-ish haze surrounding the Sun, but no, there’s none of that. These solar-specific binos render a surprisingly dark background sky. On a few occasions, I’ve seen birds and airplanes silhouetted against the Sun, also in sharp detail. Don’t you love it when your expectations are exceeded?!

More interesting to me is what others report when they use the SUNoculars. The most common comment is, “WOW!” Given that the binos deliver so many first views of the Sun, that reaction is not surprising. What is surprising is how many of my guests also say, “It looks like the Moon!” which I take to mean that the white solar disc against the black background sky produced by the SUNoculars is reminiscent of the full Moon against a dark sky, and which I therefore consider a compliment.

I’m also often asked, “What are those black spots?” even after telling guest that they might see sunspots (and they do appear decidedly black in the SUNoculars). You and I are so familiar with the phenomena that we take for granted everyone else will understand what we mean when we describe sunspots. But most of my guests are seeing the Sun for the first time. They have no preexisting expectations of what sunspots look like. And so, I answer, “Good eye! Those are the sunspots I mentioned. They’re areas of the Sun’s photosphere that are so much cooler than the surrounding areas that they appear dark to our eyes. They are still quite hot and bright – only about 36-percent cooler than the rest of the photosphere, which is a bit less than 10000° Fahrenheit, or 5500° Celsius.”

I check the Sun often with the SUNoculars (assuming skies are clear) and not just because they are so much easier to deploy and share than the solar scopes I utilize. I also like that viewing with both eyes is more immersive. But yes, the binos do get more use if only because they require no set up. On days when predominant clouds allow only brief views of the Sun, it isn’t worth setting up and aligning a telescope, but the binos are ready in an instant.

Lunt’s website reports: “The light of the Sun is reduced to a comfortable 1×10-5 transmission, and all ultra-violet and infrared components are completely and safely blocked.” As with the eyecup extension, I’ve no way of measuring this. Instead, I can only attest that I’ve now used the SUNoculars hundreds of times without negative impact on my vision. Views of the Sun through the binos are bright, but comfortably so.

The SUNoculars 8x is a meaningful enhancement that yields an intimate perspective of the Sun. Add that they provide an intuitive, hands-on experience, and you begin to see what makes these solar binos such an effective bridge between also-intuitive but zero-magnification solar glasses and the hands-off, stationary experiences of higher-resolution solar telescopes.