Orbitrack 2 is the latest release of the satellite tracking app from the original developers of SkySafari and is now available for both Android and iOS. Orbitrack puts thousands of orbiting satellites at your fingertips, lets you find them in the night sky, and presents an encyclopedia of facts and figures on them. 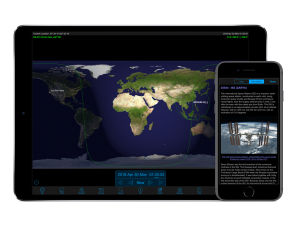 The new Android version of Orbitrack runs on Android 10, and supports the latest 64-bit Android phones.  The new Orbitrack 2.3 for iOS adds support for iOS 13, and the new family of iPhone 11 devices.

Orbitrack 2 for iOS and Android is an advanced reformulation of the older Satellite Safari app originally created by Tim DeBenedictis with Southern Stars.  It features a greatly expanded database, as well as augmented-reality and virtual-reality modes with voice commands.

Orbitrack 2 predicts and displays Iridium flares, and lists radio frequency data for amateur radio satellites. Descriptions for hundreds of spacecraft have been updated. Every satellite has a description from n2yo.com.

And for phones, Orbitrack runs in stereo, with a new voice-controlled Virtual Reality mode compatible with any smartphone VR viewer.

Orbitrack for iOS and Android is available today on the iTunes Store and Google Play. The iOS version requires iPhone 6 or iPad 2 running iOS 10 or later, and supports iPhone X/XR/XS, iPhone 11, iPad Pro, and iOS 12 and 13.

For Android devices, Orbitrack requires Android 4.4 or later and supports Android 10.  It’s a 64-bit Android app that runs on Android devices with both ARM and x86 processors.

And to make it easier for you to get the most extensive telescope and amateur astronomy related news, articles and reviews that are only available in the magazine pages of Astronomy Technology Today, we are offering a 1 year subscription for only $6! Or, for an even better deal, we are offering 2 years for only $9. Click here to get these deals which only will be available for a very limited time. You can also check out a free sample issue