Tim DeBenedictis with Southern Stars has been working on a number of updates for his Orbitrack satellite tracking app for iOS and Android.  The latest updates are now ready in the release of Orbitrack 2.4 for iOS and 2.1 for Android that reflect the changes that have been taking place in our skies over the past few months. 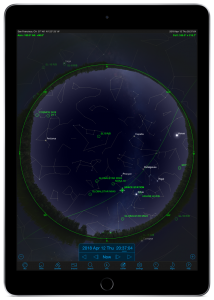 Included among the updates are:

– Updates satellite data every hour, to keep up with the rapid orbital maneuvers and new launches in SpaceX’s Starlink communications satellite constellation.

– As Iridium de-orbits its Block-1 satellite constellation, Iridium flares have become a thing of the past, so Iridium Flare prediction feature has been removed.

SpaceX is launching a new group of 60 Starlink satellites in the latter part of May.  Orbitrack provides an excellent opportunity for sky-watchers to see these new “birds” take flight – and Orbitrack can help you find them.

The latest updates are free for current owners.  A new app purchase is just USD $4.99 on the App Store or Google Play.

Another cool app for keeping up with deep sky objects was recently released by Bill Tschumy, formerly with Simulation Curriculum (the SkySafari app). The “Our Galaxy” app that helps users visualize the locations and physical properties of deep sky objects in and around our Galaxy.