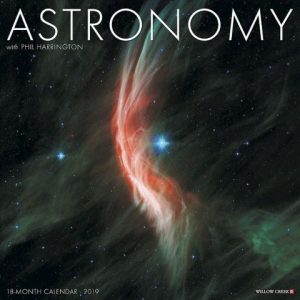 Is it too early for Christmas shopping? Given that Phil Harrington’s Astronomy 2019 Wall Calendar ($9.99US) by Willow Creek Press is already in stock, we don’t think so.

Phil’s 12-month 2019 Wall Calendar measures 12 by 24 inches when opened and is printed on high-quality FSC paper. Noted dates include includes all major public and culturally-significant holidays, and the layout provides plenty of space for notes, important dates, contacts, and other events. And, as if you needed another reason to order one now for yourself, the calendar includes six bonus months, July through December 2018. 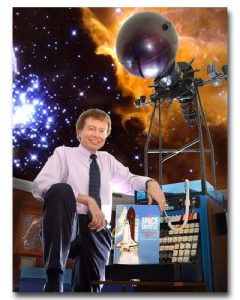 A lifelong amateur astronomer, Phil Harrington was bitten by the “astronomical bug” when he was assigned to watch the total lunar eclipse of April 1968 as a homework assignment. Since then, Phil has spent countless hours touring the universe through telescopes and binoculars. He is a former staff member of New York City’s Hayden Planetarium and instructor at the Vanderbilt Planetarium in Centerport, New York.

Phil is an adjunct professor at Suffolk County Community College, Selden, New York, where he teaches courses in stellar and planetary astronomy. He is a founding member of the Westport (CT) Astronomical Society and is also one of the coordinators of the annual Astronomer’s Conjunction, held ever summer in Northfield, MA.

Phil has also been a contributing editor for Astronomy magazine, where he has reviewed telescopes, binoculars, and other astronomical equipment, as well as writing a “Binocular Universe” column.

In addition, he has written for Deep Sky and Sky & Telescope magazines.  A complete listing of his articles, both in magazines and on-line, can be found here.