The Polar Scope Align app for iOS was designed to make polar alignment easier and provide an alternative method of aligning polar scopes to improve their precision. The app supports almost every polar scope used in the field including ones from iOptron, Astro-Physics, Takahashi, Orion, Celestron, Meade, Vixen, Astrotrac, Losmandy, Kenko, Avalon, even early 80’s designs like the Tuthill, or finders like the Telrad. 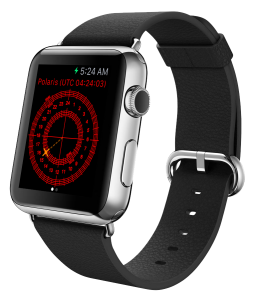 According to the developer of the app, “While the Polar Scope Align app was made for my use to allow me to compensate for the centering error of my polar scope, it was released for the app store when I noticed it was actually more accurate than many other apps available, which either had miscalculations or were not calculating important factors like atmospheric refraction.”

He continued, “As users appreciated the core functionality, I got numerous requests to support more polar scope types and add more features. I am pleased to say I have satisfied almost all of the requests with support of 18 different reticles covering various types of polar scopes and have added features to assist in any polar alignment situation. The Pro version goes beyond polar-alignment, with weather forecasts, lunar calendars, astro calculators, DSO database and more! So apart from the most accurate polar alignment app, it is now the most complete in scope support and most feature-filled.”

And all the functionality for polar alignment with all those polar scopes is included in the free version. But there are also the Pro and Pro Watch versions which add tools that for astrophotography session: From weather and bubble level to calculators and a Deep Space Object database. As the app’s creator notes, “The latter is not actually a very well-known feature of the app, as it is not very related to polar alignment, but it is probably the feature I use the most in an astrophotography session.

The app is also available in a Pro Watch version has all the features of Polar Scope Align Pro, with the addition of an Apple Watch app that offers:

-Bubble level (good for placing the phone on your tripod and looking at your watch while adjusting the legs).

In the latest release, Polar Scope Align Pro v5.0 for iOS, a number of new features and updates have been added including DSS (Digitized Sky Survey) image downloads for all objects in the Deep Space Object database and a specialized astro image viewer. There are also alternative color night modes of Green and White (the latter will let you use iOS’s color filters to choose your own tint).

And if you are looking for a pure 3d astro app for entertainment, The Cosmic Watch iOS and Android apps marry the functions of a world clock and an astronomical clock into a beautifully-rendered, uniquely-instructive interface.