St. John’s College in Santa Fe, New Mexico has turned back the clock, way back, as they have commissioned and installed on their campus the only completely operational Tycho Brahe armillary sphere in existence.

The intricate device was originally invented in the 16th century by astronomer Tycho Brahe and was created to target and measure distances in space. Brahe was the pre-eminent observational astronomer of the sixteenth century who constructed and used a wide range of astronomical instruments of immense size and amazing accuracy. 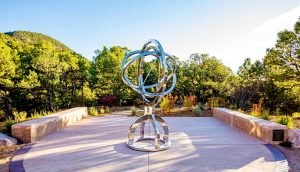 Armillary spheres were the precursor to the telescope and provided a geocentric model for measuring the movements of stars and planets. The Sphere was made possible by a fundraising project from St. John’s College Class of 2004 and friends.

The functional armillary sphere is 2.5 meters tall (8.2 feet) and made from marine-grade, mirror-polished stainless steel. It consists of four interlocking rings – forged of precision steel and aligned with the north star and equator – combined with a sliding viewfinder that is moved by hand to measure angles between the any celestial object, the horizon and the equator. It takes measurements of the positions of celestial objects by assigning a coordinate system to the celestial sphere and can be used to find and map solar, planetary, and astral positions.

Armillary spheres consist of a number of rings (Latin: armillae) which are arranged so as to model the circles of the celestial sphere. The sphere acts somewhat like a circular slide rule with four separate axes. The armillary spheres that were created by Brahe were improved by him from earlier designs from the ancient Greek mathematicians Ptolemy and Hipparchus.

The units of measure are incredibly small in comparison to the scale of the sky meaning Tycho’s armillary sphere had to be meticulously precise. The St. John’s College sphere was designed using Tycho Brahe’s elaborate writings and illustrations. British design firm David Harber was commissioned to create the working sphere from surgical-grade stainless steel. The final cost of the sphere was more than $100,000.

As Harber commented: “This is a phenomenal project and, I hope, the start of many, many hours of star-gazing for the students of St John’s College. Sadly a fire destroyed the last of Tycho Brahe’s instruments in 1728, so it was only with the help of faculty members from St John’s College and scholars in the UK that we were able to piece together the information required to create this contemporary take on a historic design.”