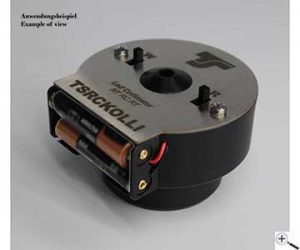 As the TS-Optics team notes, “It is well known that collimating an RC is not an easy thing. Usually, nighttime use on a star is necessary. With the TS collimator, it is possible to obtain an ideal collimation result at daylight. With this, there is always an optimally collimated RC telescope at your hand at night. At the same time, collimation is easy and can be done by anyone. But it is important that the secondary mirror of your telescope has a central mark.”

Here are the  TS-Optics team instructions on using the collimator:

Place the optical tube on a table or move the telescope on the mount into a horizontal position. It is helpful to aim the telescope at a homogeneous bright surface (paper, house wall, …). Put the collimator into the 2″ receptacle of your focuser. It helps when you direct the labelling to the collimation screws, this makes working easier. Press your hand slightly from the backside against the collimator. Now you are ensured that the collimator is optimally placed in the focuser. Now tighten the locking screws slightly. Next, switch on the collimator in Newtonian/reflector mode (red LEDs). Now look through the hole.

The result at the end of this step of the collimation should look like Image 2.

RC telescopes with tilting mechanism at the focuser

TS-Optics also points out, “Many Ritchey-Chrétien telescopes have a third collimation possibility – tilting the focuser. It is often tried to compensate a bad collimation with this tilting, but that does not work well. For this reason, you should adjust the tilting mechanism until it reaches the position stop before collimation. Thus it is ensured that the optics is optimally adjusted to the focuser. The tilting mechanism should be used for adapting the camera sensor optimally to the telescope. Thus you can compensate a minimally skewed position of the sensor or a slight tilt of the focuser.”

You can learn more about the TS Optics 2″ LED Collimator for RC Telescopes here. 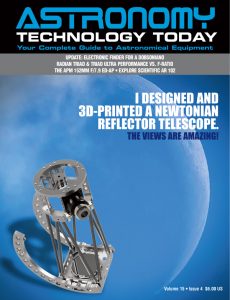