Using FireCapture for solar imaging is the subject of this video that walks through how to focus your instrument(s), create flat calibration and manipulate parameters for exposure to see various features and record them in one exposure, both the surface and the limb together. 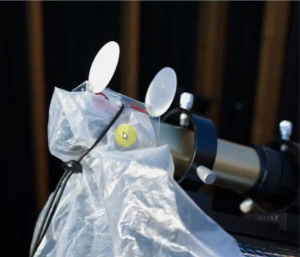 The video’s author, Martin (Marty) Wise, has offered these key elements to know before watching the tutorial video:

FireCapture: I’m using FireCapture software for solar imagin specifically for this entire process. Huge thanks to the author of this software and that it’s free!

I use gamma a lot in FireCapture, it’s totally software manipulation. I do not use gamma (its off or neutral, neutral is 50 in FireCapture by the way) when recording, however. Gamma stretches values that are useful when using your eyeball to see what’s on your live feed from your camera, it’s handy to stretch up the shadows and mid-tones (moving the slider to the left towards 0) (less contrast, see faint stuff like prominences); it’s also handy to crush the shadows and mid-tones so that perceived contrast is higher on things like spicules, plages, filaments, spots, etc. (moving the slider to the right, towards 100).

Several times in the tutorial I will set exposure and then use gamma to crush shadows and see surface detail to critically focus, and then open up shadows with gamma to then see the prominences on the limb, again, without changing exposure–the key is that exposure wasn’t changed to see the surface or prominences, just software manipulation of gamma, and the point of that is that the data is there, so turn gamma off when recording your video.

You can get the faint prominences lifted in post processing and you can increase surface contrast with post processing from the same single exposure capture (my previous tutorial, Rapid Workflow). You don’t have to use this, I just find it handy to focus and see prominences to know it’s in my data, then turn it off to actually capture the data.

Defocus method is commonly used and easy when the solar disc fills the FOV of your camera so that there’s only sun in your FOV. One can simply defocus the disc until features are gone, somewhere near the center of the disc ideally. I lower exposure values to achieve about 65% histogram fill. FireCapture recommends between 50~80% if you use the hover tool. Exposure time doesn’t matter. I prefer not to use gain if possible doing this, but you can use gain if you need to. FireCapture has a default flat frame tool built in, you simply click it, tell it how many frames you want to capture, it will capture them and apply the flat calibration to your real time video stream from the camera.

The Diffuser method is an easy way to create a flat calibration frame when the solar disc does not fill the FOV on your camera sensor, and you can see the limb or void of space around the full disc or partial disc. You need an opaque translucent bag; I’m using a cereal bag. It should not be completely see through, but opaque. Not all bags are equal, so you have to experiment and find one that does what you need.

The key is that it diffuses light, as in, it scatters the light. What this does is illuminates the bag itself so that when it’s in front of your aperture, the light source is now larger and it will fill your FOV on your sensor so that you can create a flat frame even though the solar disc isn’t filling your FOV. This works for full disc FOV with a short scope, and for partial disc FOV.

The bag needs to be over the entire aperture into your scope, but also it needs to be farther away from the front of your aperture, not directly touching it, I find it needs 2+ inches of space so that there’s no hard edge and the diffuser material will be illuminated farther out than what the solar disc would normally appear as.

A lens hood or lens shade is ideal for this to provide that space, ideally, larger than your actual aperture. This is key to not have the bag flat up against your entrance to your aperture of your solar scope (you may need to make a small hood or cardboard holder for dedicated solar scopes that tend to completely lack lens hoods). I again target 65% histogram fill.

When performing this method, put the disc in the center or near center of your FOV or sweet spot, we focus first to get critical focus, then don’t touch the focuser. Then we put the bag on, and raise exposure to fill the histogram to 65% (or 50~80% per FireCapture’s hover tool). Gamma off. Capture your flat frames with the FireCapture tool. It will auto-apply the flat frame. Now remove the bag. You will need to lower exposure values again to your recording exposure values. It will still be in focus, no need to change it. You can however still fine focus if you need to.

You can learn more about using FireCapture for solar imaging here. You can view the video below.