Solar glasses typically need to meet two constraints: You need something which will block most of the light, and you need something that can provide structural support, so it won’t fall apart while you’re staring at the sun. Thanks to modern chemistry, most of the ‘solar eclipse glasses’ you find use a specialized plastic polymer – it’s cheap, durable and relatively easy to make.

Other approaches have included adding a darkening material as a surface coating, such as Mylar. The Perkins Observatory considers Mylar, which is essentially an aluminum foil laminated to thin plastic sheets, as unsuitable. Similar materials have been used as solar telescope filters, but because surface coatings are just that – only on the surface – they are also typically more fragile. You must worry about small scratches, or pinholes. If most of your eye is safe, but one part is getting fried … then one part is still getting fried.

Which brings us to the next consideration.

What are solar glasses doing? 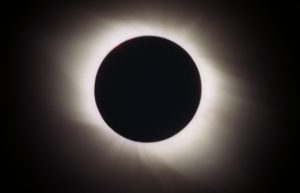 So, what about polarization filtering lenses? A single polarizing lenses can block about 50 percent of the incoming light (well, slightly more, since the sun’s light is partially polarized after passing through Earth’s atmosphere). But for every polarization filter you add, you only ever can block out another 50 percent of the light (due to the strangeness of quantum mechanics). A single filter gets you down to 50 percent, adding a second filter gets you to 25 percent, and so on. At that rate, you’d need about 15 perfectly polarizing filters in a row.

Solar eclipse glasses and simple solar telescope filters deliver a mix of all visible wavelengths of solar light, or “white light.” Much more interesting is the chance to see narrow bands of color. Most of the interesting effects happen at narrower wavelength bands, such as the H-alpha wavelength.

But this talk about different wavelengths is a reminder that, just because a material is blocking at one wavelength, doesn’t mean it’s blocking every wavelength. And there is a wide range of wavelengths that can damage our eyes.

We see visible light, but UV + IR (ultraviolet + infrared) light can also damage your eyes, even if you can’t see in those ranges. That’s why you need special materials for blocking sunlight — you can’t just hold something in front of the Sun and think you’ll be okay as long as it looks dark.

For instance, exposed color film might block enough visible light, but it won’t block enough IR light to be safe. For other materials, maybe it’s too much UV light. And these types of light can be nasty — your blink reflex only responds to visible light, so if you only block the visible light, you’ll have removed your body’s natural protection while still leaving the damaging rays.

So, only use solar glasses and telescope filters marked specifically for use as such.

Eric Gentry is an applied scientist for Amazon. Formally an astronomer, he received his PhD from UC Santa Cruz, studying the intersection of computation and physics.