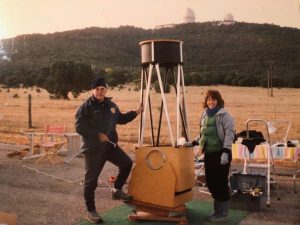 In a recent post on the Sky and Telescope website, Dave Tosteson provides a tribute to Barbara Wilson, who passed away on the evening of September 24, 2019, after battling cancer for several months.

As Tosteson writes, “Barbara was very well known in the amateur astronomy community as a dedicated and talented deep-sky observer. But she was much more than that. She was a kind and beautiful person who took time to mentor almost anyone interested in learning about our wonderful universe.”

Barbara Wilson was well regarded in the amateur astronomy community for her ability to see dim and distant objects and her willingness to teach others how to do the same. In 1993 she joined the staff at the George Observatory, operated by the Houston Museum of Natural Science, where she taught astronomy to school groups of all ages and conducted public Saturday night stargazing sessions.

Barbara observed with a twenty-inch telescope equipped with an equatorial platform built by her husband, Buster (shown in the accompanying photograph). Along with two other amateur astronomers, she discovered the globular star cluster IC 1257, which for a century had been mistakenly classified as an open cluster and co-authored a paper reporting the finding published in the Astronomical Journal in February 1997.

She also was featured with several other prominent amateur astronomers in the 2007 PBS film, “About Seeing in the Dark.”

You can visit Tosteson’s tribute here.