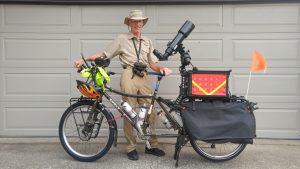 As many of you know, I (Gary Parkerson – pictured here) am editor of  the magazine Astronomy Technology Today as well as the content on this website. You also many be familiar with the work of Rod Mollise, although you probably know him better as Uncle Rod. No doubt, you’re also aware of his astro blog. If not, do yourself a favor and check it out.

Uncle Rod’s blog installment number 521 is titled, “So, What’s Gonna Happen to Us?” By “us,” he means amateur astronomy, and the article created quite a stir. Bottom line, Rod predicts change in a form that won’t make many of us happy, and although I don’t want to admit it, his analysis is so tightly reasoned – so thoroughly founded in history – I can find no crack within which to wedge a convincing counter argument.

Rod explains the apex of amateur astronomy as resulting from a unique confluence of historic trends: (1) Heightened interest in astronomy whetted by an intense international focus on the space race, (2) just when there was a proliferation of impressionable children thanks to the post-war baby boom, (3) also when still-young television delivered compelling live imagery of rocket launches and of astronaut and cosmonaut heroes, (4) and all without the distracting explosion of digital technology that has new generations (and old) focusing down into smartphones, rather than up.

Throw in that the eldest boomers entered retirement age in 2007-2009 as the most affluent generation in history, and it’s easy to agree that the eventual passing of that (my) generation will have dramatic effect on amateur astronomy and the industry that supplies it.

Rod concludes: “The amateur astronomy of the last fifty years was an aberration. It was brought on by a special and unlikely to be recreated time in our history, the now past Space Age.” He continues: “So … what? So, amateur astronomy is doomed? Yes, it is. Well, not really. Amateur astronomy as we’ve known it over the last fifty years is doomed, I believe. It can’t help but be. Our ranks will begin to shrink, and as they shrink, the ad pages in the magazines (possibly virtual pages before long) displaying the tons of products that have defined our astronomy will also shrink in number.”

As I say, I don’t like Rod’s prediction, particularly that bit about magazine transitions and shrinking ad pages, but I agree, at least with the conclusion that amateur astronomy will change, as has this magazine, as do all human institutions. Amateur astronomy will become something unrecognizable to those of us who consider the last 50 years the zenith of our shared passion.

The question that remains unanswered for me is, will it become something more or something less? I don’t know the answer, but I’m willing to work to help guide it into something more. It is for that reason that I’m now undertaking daily outreach. It is for that reason that I’m doing something so ridiculous, it cannot be ignored by anyone confronted firsthand with its lunacy: pedaling a bicycle overloaded with astro tech through 48 U.S. states to deliver views through – and of – quality telescopes to thousands of folks who might otherwise never have that opportunity.

It is for that reason that I ask you to help me and others who invest of themselves regularly to transform amateur astronomy into a future that remains relevant to generations who did not experience our “unlikely to be recreated” history.

Uncle Rod is right, amateur astronomy will transition into something much different from the avocation with which we’ve become so complacently comfortable. It must. We the aging boomers who formed local astronomy clubs, we who built regional observatories and regularly staffed community star parties, we the 20 percent of über astronomy enthusiasts who buy 80 percent of the gear advertised in these pages … we won’t be here forever.

What can you do? Well, you can continue to support our magazine, despite the vagaries of its publication schedule. I don’t multitask as well as when I was younger, and the Pedaling Astronomer Project delivers so many delightful distractions, I could write a book about them (and will). It has been difficult to keep up with my ATT duties from the road, but this too shall pass. I’m becoming more adept at working from campsites, motels and guest bedrooms as I pedal the country.

In other words, act! Take responsibility for shaping amateur astronomy’s future into something as positive as was the last 50 glorious years, the golden era that played such a positive role in shaping you. As Carl Sagan observed, “Every kid starts out as a natural-born scientist, and then we beat if out of them. A few trickle through the system with their wonder and enthusiasm for science intact.” You made it to adulthood with your sense of wonder intact. Help others retain theirs, too.

For years, I talked and wrote about amateur astronomy’s demise. I complained without offering solutions, waiting for someone else to do … something. The bad news is, there are no easy answers. The good news is, as difficult as it may seem, there is still much we can do. On August 21, 2017, millions in the U.S. were treated to an object lesson in the relevance of astronomy – a coast-to-coast, social-media-friendly total eclipse of the Sun.

No, it’s not likely to have as lasting an impact as did that heady decade of nascent human space exploration, but it turned millions of eyes skyward. We can build on that. We can remain passive observers of amateur astronomy’s waning – and as much as it has given us, shame on us if we do – or we can act.

Sagan wrote, “It has been said that astronomy is a humbling and character-building experience,” and it’s true. I mentioned bad news and good news, but the best news is that sharing astronomy with others is even more rewarding, more character-building. I’m a better person for delivering telescope views to those I’ve encountered through the Pedaling Astronomer Project – not great, not even good, but much, much better.

Will you join me? I welcome your thoughts at gary@astronomytechnologytoday.com.

PS: Thankfully I’m not alone! As many of you read this, you had many positive thoughts and words to say in support of amateur astronomy. We especially enjoyed George Stallings’ response and you can read it here.