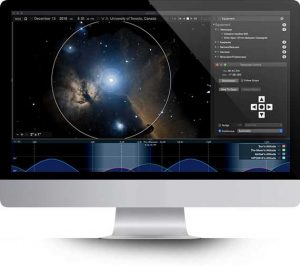 has released Starry Night 8, the latest version of its Starry Night software. In version 8 the company has released one of its most significant updates ever, with new functionality across the three available options –Pro Plus, Pro and Enthusiast. A new version 8 release of the Starry Night Complete Space & Astronomy Pack will be available soon.

Here is an overview of the highlights of the Starry Night 8 new release:

– Starry Night 8 supports all telescopes that are supported by Ascom. Plus, connect SkyFi 3 with Starry Night as well.

– Backup your data to secure cloud storage, sync it across Starry Night & SkySafari, and access it on LiveSky.com.

– Web-delivered multimedia reveals the science of the solar system, stars, galaxies, and the known universe.

At the heart of all levels of Version 8 is a new Deep Sky Database of extended objects that makes the Starry Night experience better than ever before.  This includes:

– The most accurate sizes & shapes of objects ever in Starry Night

– New and updated mission paths for your favorite space missions

Filled with new features to make observing as interesting and efficient as possible, Starry Night 8 will meet the needs of most advanced observers and help amateurs & enthusiasts take their astronomy game to the next level. This is accomplished by:

Integral to Version 8 is the LiveSky Cloud. In addition to being stored on your computer, all of your observing data is optionally backed up, free of charge, to private cloud servers. The LiveSky.com Cloud isn’t just about backup, however — it opens up a universe of possibilities for extending, sharing & analyzing your observing data. These include the ability to:

– Sync, share and export your data to other services with ease

– Preparing sessions & recording observations is easier than ever

– Sync to any LiveSky-enabled astro app including SkySafari 6